Our offices will be closed Monday, January 2, 2023

Karnes Electric Cooperative, Inc. was incorporated on October 24, 1938 to bring electric light, power and heat to rural areas the Investor Owned Utilities refused to serve. Neighbors joined together, and with the assistance of the Rural Electrification Administration (REA), formed a member-owned, not-for profit, electric distribution cooperative to be locally owned and operated. On April 10, 1939, the members of the newly formed Karnes Electric Cooperative, Inc. hired A. L. Stegner as resident engineer and leased an office and warehouse in Karnes City, Texas. The cooperative was awarded its first contract to build 232 miles of line on May 9, 1939. 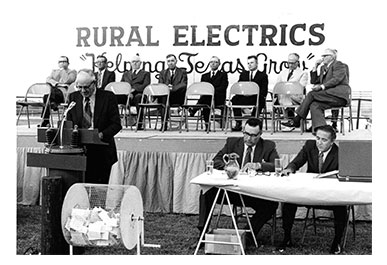 STEC is a “Cooperative of Cooperatives” wholly owned by eight electric distribution cooperatives covering the vast majority of south Texas. These are:

Power provided by STEC to its members is generated from a variety of energy sources including: wind, lignite, natural gas (NG), diesel fuel, and hydroelectric. Long-term Purchase Power Agreements include: